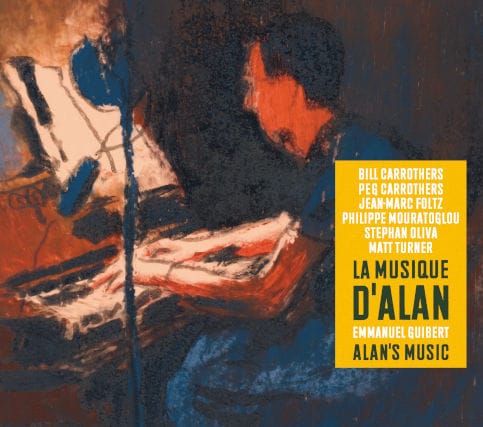 Emmanuel Guibert is the author, among others, of two major books published in 2000 and 2012, La Guerre d'Alan andl'Enfance d’Alan. These multi-award winning books tell the story of Alan Cope, an American soldier landed in Normandy in 1945, at the age of twenty. Alan Cope never returned to the United States and made his life in France, where he died in 1999 in Saint-Martin-de-Ré. There, in 1994, he met the cartoonist Emmanuel Guibert by chance. An incredible friendship will be born between them, Alan Cope will tell him his life, and Guibert will make a book of it. In fact already three books (Martha & Alan was released in 2017), working on a fourth one.

Back in 2012, I ask Emmanuel to draw all the record covers for Vision Fugitive. A music lover, he takes it very seriously. Five years and a few records later, in 2017, I propose him to produce a musical setting of his first 2 books on Alan Cope.

As his friend is an American who has spent his life in France, a French-American line-up seems obvious: Stephan Oliva, Philippe Mouratoglou and Jean-Marc Foltz here in France, Matt Turner, Peg and Bill Carrothers on the other side of the Atlantic. Cello, voice, 2 pianos, guitars, clarinets. Then I ask each musician to read the 2 books and each one to propose 2 pieces of music, from a sentence, a passage, or several pages of these books. Compositions, standards, improvisations, everything will be welcome. All instrumental combinations as well.

The meeting and the recording took place during 4 days, in Pernes-les-Fontaines at La Buissonne studios in July 2019.